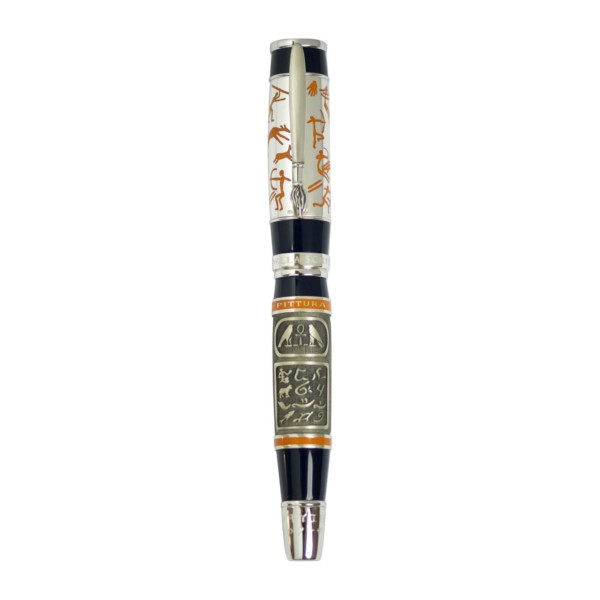 The “Pittura – Arte della Scrittura” Limited Edition, gently placed on the superior tray of the handmade wooden box, as the previous dedicated to Literature Limited Edition, is a handcraft of Italian excellence. It is refined in every single detail and once again it is designed to offer the best writing experience.

A new masterpiece, another tool of the art of writing collection that tells about Painting and the art that takes form representing a subject or expressing the fantasy through lines, colors, shapes, values and tones on a surface.

The procedures that allow to set colored elements or pigments on a surface, depending on the man or artists’ project, have gone through variations and different preferences.

How painting was born? Why man has felt the need to express himself and his thoughts through images and colors since the antiquity?

Maybe because “Painting” according to Pablo Picasso “is only another way to keep a diary”.

Our tribute to Painting comes from the first signs left by man and leads us until the birth of the ideograms and cuneiform writing, signs and figurative shapes that gave birth to the alphabet.

Our journey starts with the Upper Paleolithic and takes us into a cave located in a village, in the north of Spain, a few kilometers from Santander. It is here that in 1879 cave paintings have been found and thanks to subsequent analysis of dating, it results that they date back of 35.000 years. Additional recent studies have also confirmed that these cave paintings are the result of collective works completed over thousands of years.

The UNESCO heritage Altamira Cave has been defined by the French archaeologist Joseph Déchelette “the Sistine Chapel of Prehistory” for the artistic-historical importance of the wall painting that it is possible to admire.

Made in charcoal and red ocher, the Altamira cave paintings, show the first chiaroscuro effects obtained by diluting the colors themselves. The images shown, mainly wild mammals and human hands, are concrete examples of real pictographic writing, understandable by anyone and precursor of language. The image of an animal or its graphic representation is based on a universal language that can reach any observer.

Our symbolic journey continues further south, into the mountain massif of Tassili n’Ajjer within the Sahara Desert. Right here they have been identified so far around 15.000 among paintings and rock engravings dating 10.000 and 9.000 years ago. They represent cattle herds, big wild animals and mainly human activities such as hunting and dancing that refer to the Neolithic era, when the climate of the region was more humid, and savannah was all over instead of the desert.

Once again, the images speak a universal language representing an event: the killing of a prey, how many hunters took part in an expedition or which animals had been caught.

The man’s need to communicate evolves together with the evolution of his own intellectual capacities and throughout time.

The ideogram is nothing else but a very stylized sign that corresponds to a word.

The man’s need to communicate images and thoughts through a simpler writing appears much clearer among the Mesopotamian civilization and the Egyptians.

The drawings of Sumerian writing and the cuneiform writing on one side, the hieroglyphics and hieratic writing on the other, represent the conjunction ring between painting and writing and with no doubt they are the origin of all the writings through the first phonic alphabets symbols.

The “Pittura – Arte della Scrittura” Limited Edition, gently placed on the superior tray of the handmade wooden box, as the previous dedicated to Literature Limited Edition, is a handcraft of Italian excellence. It is refined in every single detail and once again it is designed to offer the best writing experience.

The piston filling fountain pen is made in 925 both polished and antiqued silver, lacquer and precious blue/black resin which has been turned by hand from solid bar.

The clip fits on the cap and celebrate this Limited Edition with the main painting tool: the brush. This 925-silver style detail is made by hand and refined in every detail until the final part that includes the bristles.

The statuary and well-balanced barrel is also made in 925-silver, lacquer and blue/black resin.

The central part of it shows the high relief Mesopotamic and Egyptian writing images decorations, being all ideographic representations that gave rise to the following alphabet and ideally linking the sign left over by painting to writing.

Entirely realized by hand made casting technique, the barrel declares the theme of this Limited Edition through the wording PITTURA standing among the ocher lacquer above the decorations.

The 925-silver knob, finely engraved with the first Phoenicians and Greek phonic alphabetical symbols, seals this precious tribute to painting.

Four water-based ink bottles, in the blue/black, orange, green and turquoise color, welcome the eight handmade charcoals and the sketchbook located at the base of the box.

Furthermore, a limited numbered production of massive gold pens is available up to 10 exclusive pieces either in the piston filling fountain and the rollerball.

The “Pittura” edition of the “Arte della Scrittura” collection follows the “Letteratura” edition almost to underline Leonardo da Vinci quotes “Painting is poetry that is seen rather than felt, and poetry is painting that is felt rather than seen”.[/vc_column_text][/vc_column][/vc_row]